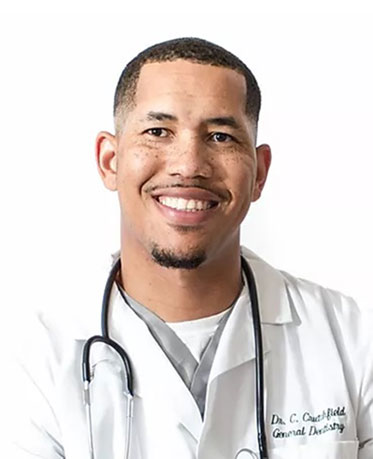 Dr. Carl Crutchfield received his Doctorate of Dental Surgery degree from Meharry Medical College, Nashville, TN in 2009. To further his interest in helping patients with dental phobia and anxiety, he completed advanced education in IV conscious sedation at Miami Valley Hospital in 2010. In 2014, Dr. Crutchfield graduated from general practice residency training also at Miami Valley Hospital, where he spent a year providing routine general dentistry, utilizing various forms of conscious sedation, treating special needs patients in the operating room, evaluating and treating cancer patients, as well as servicing those with dental concerns hospitalized for other issues throughout the campus or who may have visited the hospital emergency room for dental emergencies.. During that time, he also became an Advanced Cardiac Life Support (ACLS) instructor and an affiliate instructor for teaching moderate sedation to general dentists interested in learning proven and safe techniques. Dr. Crutchfield was appointed Dental Director and Full-time Attending Dentist within the dental residency program following his graduation. During his time as an educator, he received numerous accolades from both students and staff for his contributions to their dental education in and out of the operatory. Dr. Crutchfield has been a member of numerous national organizations in dentistry including the Ohio Dental Association, the American Dental Association, the American Dental Society of Anesthesiology, and the Association for General Dentists. In his spare time, he enjoys relaxing with his wife and three children, spending time in the great outdoors, and dabbling in photography.